How important is lameness in the puppy and adolescent dog? 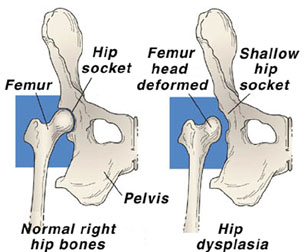 Lameness indicates a deviation from normal gait. The commonest cause is pain in the limb. Since puppies and young dogs are by nature exuberant, most lameness is transitory and clears up quickly with restriction of exercise. Some causes are more serious and if not treated promptly can result in permanent deformity, arthritis and ongoing lameness. Certain breeds of dogs are prone to bone diseases related to the period of bone growth. This, in large breeds, can last up to two years of age.

It is prudent with any puppy or young dog that is lame for more than a few days to have a veterinary examination to establish the cause of the problem. This may involve blood and other tests, radiographs (x-rays), etc.

My Poodle puppy appears to have a loose knee joint surely an x-ray is not necessary to diagnose this?

Radiography (x-ray) may not be necessary to make the diagnosis but could be essential to establish the extent of the problem and decide on the best course of treatment. The affected and the normal limb are often radiographed (x-rayed) for comparative purposes. In addition several views may have to be taken with the limb carefully positioned. Sedation or a general anaesthetic may be necessary for this.

Are there many bone problems needing such extensive investigation in a young dog?

Hip dysplasia (HD). This is a common problem affecting many breeds. Think of the hip as a ball and socket joint. Both components have to grow at equal rates in order to ensure a sound joint. Hip dysplasia results in an ill fitting joint often with a mis-shapen ball (femoral head) and a shallow socket (acetabulum). Frequently there is evidence of arthritis even in the very young dog. Hind leg lameness, weakness and pain are all signs of the condition. It can become evident in puppies of as young as 4-5 months.

The condition is due to several factors. Genetics plays a part which is one of the reasons German Shepherd dogs, Labradors and certain other breeds have such a high incident of HD.

There is a scheme run jointly by the Kennel Club and the British Veterinary Association. Dogs are radiographed (x-rayed) when over 12 months of age. The radiographs are then submitted to a panel of scrutineers for scoring. This gives an indication of the severity of the condition. The lower the score the better the hips. The aim is to always breed with an animal with a lower score.

Treatment options depend on the severity. They range from simple medication to complex surgery. 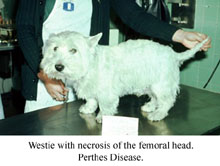 Perthes disease or Avascular necrosis of the femoral head is another condition causing hindleg lameness. Unlike hip dysplasia, this condition is seen more commonly in small breeds, e.g. West Highland White Terriers, small Poodles, Yorkshire Terriers etc. It is caused by a reduction in blood supply to the growing femoral head. The condition appears to be familial (genetic). Affected dogs respond well to surgery.

Elbow dysplasia. This is a collective term for a group of common developmental orthopaedic conditions affecting the elbow joint of young dogs. Like hip dysplasia there is now an official BVA/Kennel Club scheme which involves x-raying the elbow joint when the puppy is over a year old.

Osteochondritis dessicans (OCD). This is a defect of the smooth cartilage lining of certain joints. These include the shoulder, elbow, knee (stifle) or hock. Treatment initially involves strict rest which may bring about healing. If not surgery must be considered in order to remove the defective cartilage.

Hypertrophic osteodystrophy (HOD). The bones of the limb grow from special areas at either end of the long bones, known as growth plates. Young dogs of medium and large breeds can be affected with an inflammatory condition of these areas that is extremely painful. The cause is not fully understood although problems with over feeding and over supplementation may be implicated. Usually the condition resolves with little interference other than pain control but sometimes damage to the growth plate can occur, resulting in subsequent deformity.

Panosteitis. This is another inflammatory condition of long bones affecting larger breeds. It appears more common in males and the inflammation, unlike HOD, involves the whole surface of the bone. Sometimes there is a shifting lameness from one limb to another as different bones are affected. It appears to be self limiting but can recur during the whole period of bone growth, (i.e. growing dogs). Treatment is aimed at pain control and restriction of exercise.