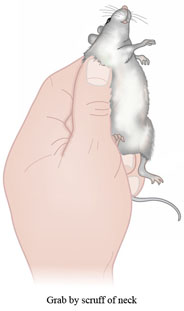 A mouse's lifespan is only 18-36 months so ageing changes and natural fatal conditions such as tumours are fairly common. Tumours are especially common for two reasons - many mice are descended from strains specially bred for the study of tumours and also because some tumours appear viral in origin. Here we cover the more common conditions you should recognise so that you know when to take your pet to a veterinary surgeon. Many people think it is not worth taking a mouse to the vet but those with mice as pets or show animals can become very attached to them.

The skin fungus ringworm is common in mice. This should not be confused with barbering which happens when mice gnaw each other's fur and cause bald, often symmetrical patches. Notice that in a group of rodents there will be one, the dominant animal in the group, which is not barbered. Your veterinary surgeon will diagnose ringworm either by using an ultraviolet light, under which the ringworm lesions on the skin may fluoresce (glow) or by taking a small amount of hair and examining it under the microscope (and probably submitting for ringworm culture). Such an examination will also show if there are any fur mites causing the skin problem.

Cancer of the mammary glands (breast tissue) is very common in mice. It is almost always malignant and so the prognosis is very poor. Nevertheless tumours can be removed surgically and, in an animal with a short lifespan such as the mouse even a couple of months of extra life is significant.

Diarrhoea is common in mice and can be caused by a wide range of infectious organisms. These range from bacteria, through single-celled organisms like coccidia to parasites such as tapeworms. Among the bacteria are two of particular importance: Salmonella spp and Bacillus piliformis. Salmonellosis is a zoonosis, i.e. it can be passed from animals to humans so any diarrhoea should be investigated with a faecal culture to ensure Salmonella is not the cause. An animal with Salmonella may have to be euthanased (as this bacterium cannot always be treated but other bacteria can with a drop of an antibiotic (such as neomycin) by mouth. Bacillus piliformis causes Tyzzer's disease which often results in generalised illness and death. Antibiotic treatment may be effective but it is important to have a quarantine period for new animals coming into a collection.

Pneumonia is common in mice and occurs often in larger colonies rather than in animals kept individually or in small groups. Animals with breathing difficulties, a hunched up posture and loss of general condition may have respiratory problems, caused by viruses or by bacteria, especially Mycoplasma spp.

This is only a very small survey of the problems you may see in pet mice. Many diseases are related to poor husbandry, showing the importance of keeping your pet in the best possible conditions.