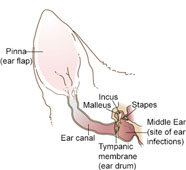 Ear problems in puppies can occur and many are due to infection of the ear canal with tiny mites – Otodectes cyanotis. This mite is smaller than a pinhead and is more common in, and better tolerated by, the cat than the dog. It is not the only cause of ear problems in puppies.

The dog’s ear consists simply of three parts - external, middle and inner. The external ear comprises the flap, or pinna and the external auditory canal. This runs vertically under the skin of the face and then turns inward for a short distance to end at the eardrum or tympanic membrane.

The tympanic membrane, eardrum, divides the external ear from the middle ear which is housed within the large temporal bone of the skull. It consists of the tympanic membrane (eardrum), and three small bones (auditory ossicles) which transmit sounds in the form of vibrations from the eardrum to the inner ear.

The inner ear is the most complicated part of the ear and consists of fluid filled channels and sacs. It is not only concerned with the transmission of sound but areas known as the semi-circular canals are also concerned with the maintenance of balance.

The function of the external ear is to direct sounds down to the eardrum where as vibrations, they pass to the inner ear where they become nerve impulses.

The pinna (earflap) is composed of cartilage covered on both sides by skin. Its movement is controlled by small muscles so that in the prick eared and semi-prick eared breeds the pinna can be swivelled in the direction of sounds in order to direct them into the external auditory meatus (ear canal).

In the floppy eared breeds the earflaps (pinnae) are too large to allow this movement. Many Spaniels and Basset Hounds suffer from ear problems due to their large pinnae preventing ventilation and removal of excess wax and any foreign material. This occurs during natural movement with dogs of the prick and semi-prick eared types.

In the puppy otitis externa, (inflammation of the external ear canal) may be due to causes other than mites. These include conformation (long earflaps) as well as foreign bodies, e.g. grass awns or insects and also generalised skin disease (eczema) since the ear canal is lined with a type of skin known as the integument. Inflammation can also be the result of a generalised fever or, in some cases, trauma sometimes inflicted by the puppy scratching to try to relieve some of the initial irritation.

Microorganisms, in the form of bacteria and yeasts can also sometimes be the cause.

What are the signs?

Continuous irritation, rubbing and scratching of the ears, sometimes with self-inflicted eczema, (dermatitis) appearing on the outside of the earflaps. There is often a characteristic foetid odour with a lot of dark wax varying in colour from black to orange/brown. These signs in the puppy are similar irrespective of the cause. Therefore it is essential that, if noted, you contact us without delay.

How is it diagnosed?

Careful examination of the ear canal is necessary, sometimes with laboratory examination of wax, etc. since the signs will be similar, irrespective of whether the cause is ear mites, bacteria or yeast infection.

If otitis is not accurately diagnosed and effectively treated it can become chronic resulting in changes to the integument which becomes thickened. This constricts the size of the canal, making the situation worse for the patient.

You mention dogs with large floppy ears being at more risk. What can be done about this? 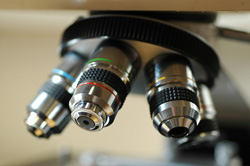 If, after careful examination, it is realised that ventilation to the external auditory canal is insufficient, a relatively straightforward operation which in no way alters the dog’s appearance can be undertaken to ensure that the external ear, including the horizontal canal and eardrum, receive more ventilation. This is known as an aural resection or lateral wall resection.

Can chronic otitis cause any other problems?

The danger is that the infection crosses the tympanum (eardrum) and the middle ear becomes involved. The problem then becomes far more difficult to treat and can ultimately result both in hearing and also balance problems.