Guinea pigs are herbivores rather like rabbits, although the physiology and function of their gastrointestinal system is less well understood than that of the rabbit. The critical area of dietary science in guinea pigs which you should be aware of is their requirement for vitamin C, covered further below. Apart from that, the key to a healthy diet in a guinea pig is variety. Imagine what the guinea pig has to eat in its native environment of the South American forests: a bit of everything from fruits through greens to root vegetables. We often feed a dry guinea pig mix with few fresh vegetables and expect that to satisfy the animal's requirements. It does not.

Why is vitamin C so important? 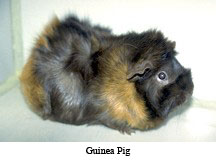 For every animal there is a set of essential nutrients and another set of non-essential nutrients. Animals need a regular dietary supply of essential ingredients, while they can produce their own supply of the non-essential nutrients. In the guinea pig and man one key essential nutrient is vitamin C. The vast majority of other animals can produce their own vitamin C from their intestinal bacterial flora but for some reason guinea pigs and human beings are not able to do this. This is why eighteenth century sailors developed scurvy when not able to eat fresh fruit. Vitamin C is vital in the normal development and maintenance of skin and mucosal surfaces like gums. It is also important in the healing of wounds to these structures. As well as predisposing to skin problems, a lack of vitamin C seems to make the body more prone to other diseases, infections and poor condition. A guinea pig which is reluctant to walk, has swollen feet or haemorrhages (bleeds) and ulcers on its gums or elsewhere is likely to be deficient in vitamin C. It is also important in bone and joint development. Young guinea pigs that are deficient may develop sore backs and swollen stifles. Older guinea pigs may appear to have breathing problems but actually have very swollen joints in the ribs due to vitamin C deficiency. Urinary disease, too, may stem of lack of this vitamin.

Vitamin C is often added to guinea pig mixes. However, it is unstable and has often been lost by the time the food is given. Therefore any food greater than 3 months after manufacture should be regarded as being potentially deficient. Vitamin C may be found in fresh fruit and vegetables with peppers being among the best sources. However, it is hard to make up for a deficient dry mix in this manner.

Vitamin C may be given as a supplement. This should never be added to the water as it may be denatured (inactivated). It is best given as tablets that can be given directly or crumbled over food. 50 mg per guinea pig per day is advised.

Vitamin C is non-toxic so overdosage will not cause a problem.

What else to feed?

The other main problem in the diet of the guinea pig is lack of fibre. This is one of the main contributors to dental disease. Therefore the staple of the diet should be hay or grass with much less reliance on commercial rations. Like the rabbit, guinea pigs are coprophagic (eat their own faeces) and fibre is essential in regulating this process.

Guinea pigs, like rabbits, will often selectively feed from a typical commercial guinea pig mix, and therefore miss out on the goodness of certain parts of the mixture. A complete pellet food, where it all looks the same, prevents this selective feeding.

They will also need a good source of calcium and vitamin D (best accomplished by keeping outdoors!).

In essence they should be fed much as rabbits with high fibre rations. The difference is the importance of vitamin C to the guinea pig.