Under what circumstances do dogs need to be confined?

Dogs are highly social animals that make wonderful pets. They can be effective as watchdogs, are excellent companions for play and exercise, and are sources of affection and comfort. However, with the lifestyle and schedule of the majority of families, dogs must learn to spend a portion of the day at home, while their human family is away at school, work, shopping or recreational activities. During those times when you are away and unavailable to supervise, your dog may still feel the need to chew, play, explore, eat, or eliminate. Ensuring that these behaviours are not practised in an inappropriate manner (from the human perspective) when you are absent involves ensuring that your dog has had the opportunity to play, explore, eat, and eliminate before you leave it and then keeping him in a confined area where it is secure and safe, and can do no damage to itself or your possessions in your absence.

It is important however that your dog still has something to do in the area in which it is confined and that he is taught to tolerate being alone rather than simply being abandoned to his own devices.

What are my options for confinement?

Depending on the structure of your home, it may be possible to dog-proof the house by closing a few doors, or putting up some child gates. Your dog can then be allowed access to the remaining areas of the house. Gates must of course be escape proof and indestructible. If dog-proofing in this way is not possible when you have to leave, then you may feel it necessary to confine your dog to a single room, pen (such as a play pen, again it must be escape proof and indestructible), or crate. This smaller confinement area not only provides safety for the dog and protection of the home from damage but also makes it easier to teach your dog what it is supposed to chew, and where it is supposed to eliminate.

A metal, collapsible crate (indoor pen) with a tray floor works well, as long as the crate is large enough for the dog to stand, turn, and stretch out. Some dogs feel more secure if a blanket is draped over the crate. A plastic travelling crate or a home-made pen can also be used. Bedding and toys should be placed in the crate.

Most dogs choose a small area, such as a corner of a room, a dog bed, or close to a sofa, as the place where they go to relax. Crate training is neither cruel nor unfair. On the contrary, leaving the dog unsupervised to wander, investigate, destroy (especially if this leads to later reprimand or punishment), and perhaps injure itself is far more inhumane than confinement. However, the crate needs to be used in the correct way and as with any product it is open to misuse. You must ensure that the crate is large enough for your particular dog, you must ensure that your dog gets sufficient food, water, play, exercise and attention before it is confined, and you must return before the dog needs to urinate or defecate. This time period will vary depending on your dog’s age, health and individual characteristics.

What are the benefits of crate training? 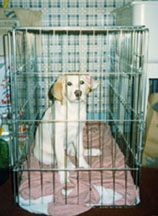 The two most important benefits are the safety it affords your pet, and the damage that is prevented. The crate also provides a place of security; a comfortable retreat, where your dog can relax, sleep, or chew on a favourite toy. It is therefore essential that the crate is never used as a place of punishment and that people do not approach your dog in the crate in a hostile manner. By positively confining your pet to a crate or room, when you are not available to supervise, behaviour problems can be immediately prevented. When you are at home, supervision and rewards can be used to prevent undesirable behaviour, and to teach your dog where to eliminate, what to chew, and what rooms and areas are 'out of bounds'.

Will crate confinement help with house-training?

Yes. If used correctly, crate training is one of the quickest and most effective ways to house-train a dog. Since most dogs instinctively avoid eliminating in their sleeping and eating areas, dogs that use their crate as a bed or 'den' will seldom eliminate inside unless they have been left in the crate for too long. Crate training can also help teach the dog to develop control over its elimination.

As soon as your dog is released from its crate, you should take it to the designated elimination area and reward elimination at this location.

Since the crate prevents chewing, digging, and elimination in the owner’s home and property, owners of crate trained puppies have fewer behaviour concerns, the puppy receives far less discipline and punishment, and the overall relationship between dog and owner can be dramatically improved.

What about crating and travel?

There are periods in a dog's life when it may need to be confined, such as when traveling or boarding. Those dogs who are familiar and comfortable with a crate are more likely to feel secure, and far less stressed, should confinement be required.

Where should the crate be located?

Because dogs are social animals, an ideal location for the crate is a room where the family spends a lot of time such as the kitchen or living room rather than an isolated utility room.

How can crate or confinement become a positive experience?

The key to making the crate your dog's favourite retreat, is to associate the crate with as many positive and relaxing experiences and stimuli as possible (food, treats, chew toys, bedding) and to initially place your dog in its crate only at scheduled rest and sleep periods. You must therefore be aware of your dog’s routine, including his needs for exploration, play, food, and elimination, so that your dog is only placed in his crate, when each of these needs is fulfilled. You must then return to your dog to release it from his crate before the next exercise, feeding or elimination period is due.

Start with short periods of time alone and leave the crate open when you are home so that your dog can choose to use it whenever he likes.

A radio or television playing in the background may help to calm the dog when he is alone in his crate, especially during the daytime. Background noise may also help to mask environmental noises which can stimulate your dog to vocalise. The crate must never be used as punishment.

THE CRATE SHOULD NEVER BE USED AS PUNISHMENT.

How do I crate train my new puppy?

What is the best technique for crate training older pets and adult dogs?

THE CRATE SHOULD NEVER BE USED AS PUNISHMENT.

Is crate training practical for all dogs?

Some dogs may not tolerate crate training, and may continue to show anxiety, or even eliminate when confined. These dogs may adapt better to other types of confinement such as a small room.

Of course, if your dog is being left alone for longer than he can control its elimination, it will be necessary to provide an area much larger than a crate, so that your dog has a location in which to eliminate, away from its food and bedding.

Continued anxiety, destruction or vocalisation when placed in the crate may indicate severe behaviour problems. In these cases the use of the crate should be discontinued and further advice sought from your veterinary surgeon. In some cases the use of dog pheromones (see puppy crate training above) may help your dog to accept the crate, but this is not a panacea, professional behavioural assistance may be required and you should not hesitate to ask for this if you think it may help you.