Puppy - Controlling Stealing and Teaching the "Give" Command

What is the best way to deal with my puppy’s 'stealing' behaviour? 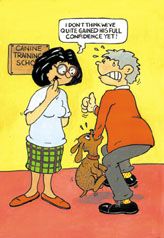 Most puppies love to explore and chew, so it is not surprising when a young puppy steals household objects, particularly if they are inherently rewarding. For example, puppies may raid bins, steal food from surfaces and enter cupboards or refrigerators where they then help themselves to snacks. Even when the stolen object is not inherently rewarding, many puppies find that the humans around them appear to view the item as something of immense value as they will put enormous effort into getting the item back. The chase that ensues after the puppy has taken the item not only increases its perceived value but also instills a perception of play which further motivates the puppy to hold onto the item and keep running. However, if the item really is of value to the owner, or is something that could be potentially harmful to the puppy, the human response may rapidly turn from playful pursuit to active punishment. What started as innocent puppy exploration can rapidly turn into a confrontational and even frightening encounter between owner and dog.

How should I react when my puppy steals something?

When dealing with an unwanted behaviour you always need to understand the motivation before you can begin to decide on how best to deal with it. Possible motivations for stealing include:

Each of these motivations will require a slightly different approach.

How can I prevent stealing?

If left to their own devices, puppies will get into trouble through being inquisitive and looking for entertainment. Reducing the risk of this involves:

How can I stop established stealing?

If your puppy continues to steal in your presence, the best means of monitoring and preventing the behaviour is to leave a long line attached to his collar. As the puppy begins to put his nose into "out of bounds" areas, the lead can be used to gently guide him away from temptation. The line can also be used to manoeuvre your puppy out of hideouts, you miss the original stealing behaviour and your puppy retreats under a table or behind a chair with the stolen item. 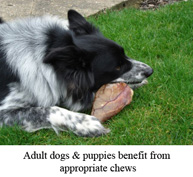 If your puppy is stealing things because the game is so much fun it is important to remove this inadvertent reward by changing the way in which you respond. For some puppies, if you ignore them when they steal things and try to engage them in something else instead, they may "give up" the object voluntarily. Alternatively, instead of chasing your puppy all over the house you could try crouching down and in a happy voice, with open arms, call your puppy to you. When your puppy looks toward you, say "good puppy, come show me". Keep up the praise as your puppy approaches. With a treat, entice your puppy to come, show your puppy the treat and when your puppy drops the stolen object, say "good dog". Make him come closer, sit, and then give the reward.

If your puppy has been stealing for some time then the approaches described above may not be successful. You will need to work on teaching your puppy a "give" command in situations unrelated to the behaviour of stealing before you can start to use reward for release within the context of stolen items.

If your puppy has learnt to anticipate punishment in the context of holding a stolen item it is possible that he will respond by retreating under tables or behind furniture. If this happens it is vital that you DO NOT reach for your puppy in anger. If you reach under the table or behind the chair and grab at your puppy’s collar it will interpret this behaviour as a threat, and he may respond with aggressive behaviour which is motivated by a need to defend himself. This will only make the situation very much worse and will do nothing to rectify the stealing behaviour.

How can I stop food stealing in my absence?

This usually requires preventing access to problem areas through the strategic use of baby gates, doors and indoor pens. Many authors have recommended a range of booby trap devices which are designed to give punishment from the object while the act is occurring. Examples of these devices are shaker cans, empty drinks cans that have pennies in them, which are rigged up to fall easily when the target item is moved, thereby startling the dog, and punishing the stealing. However, this form of booby trapping should never be used when the owners are out of the house since the only way in which it can be effective is if the dog is immediately rewarded from coming away from the target item.

Food items are inherently rewarding and for many dogs the endurance of a startling noise as the shake cans fall from the work surface is more than compensated for by the reward of eating the food. For this reason booby trapping is unlikely to be successful and if your puppy is stealing food items the only reliable way of preventing the behaviour is make sure that such items are inaccessible, or to teach your puppy that it is more rewarding to walk away from them than it is to steal them.

How do I teach the "give" command?

It is very useful if you can teach your puppy how to give up items on command. First, you need to encourage your puppy to pick something up which is of low to medium value, such as a toy. Remember, if it is something very desirable, you may have a difficult time getting your puppy to let it go. Therefore in early training work with less desirable items and build up to highly desirable items over time. 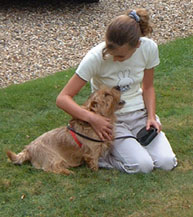 When your puppy is familiar with the "give" command and clearly understands what it means, you can begin to repeat the exercise without the reward being on view. Instead only produce the reward after the item has been released from the mouth. This stage of the training is important as you need to avoid the situation where he will only drop something if he sees a reward. There is a high chance that your puppy could pick up a dangerous item on a walk when you do not have a desirable reward item with you and if the release of the item is dependent on the sight of an impending reward you will have problems.

Whenever you train a new command, repetition and patience are extremely important. It is not enough to try to teach "give" for 1-2 minutes one day and expect your dog to know it the next. It is through repetition and practice that the behaviour will become reliably established.