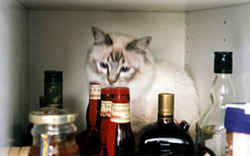 It is sometimes said that because cats are fussy eaters they are less easily poisoned than dogs. However, with their curiosity and fastidious grooming, intoxication is not that uncommon. Some factors predispose cats to becoming ill once they have been exposed to a poisonous substance; these include their small body size, their ability to hide so that exposure is not immediately evident, and because cats, being specialist carnivores, lack certain liver enzymes they are unable to decontaminate certain chemicals. It is because of this that when cats become poisoned they are perhaps less likely to recover than dogs.

How can a cat become poisoned?

Cats can be poisoned via a number of routes. Contamination of the digestive system can result from the direct ingestion of a toxic substance, ingestion of poisoned prey, or from grooming contaminated fur. Some toxins can even be absorbed through the skin of the cat, (particularly the paws), and a few can gain entry by inhalation.

What clinical signs might warn me that my cat may have been poisoned?

The clinical signs are very variable and will vary depending on the particular poison concerned. Many toxins produce gastrointestinal signs (vomiting and diarrhoea), others produce neurological signs (tremors, incoordination, seizures, excitability, depression, or coma), respiratory signs (coughing, sneezing, difficulty breathing), skin signs (inflammation, swelling), liver failure (jaundice, vomiting) or kidney failure (increased drinking, inappetence and weight loss). Some toxins act on more than one body system, and so can produce any combination of the above signs. It is important to remember that while most cases of intoxication will cause acute problems, chronic intoxication can also arise, and often proves even more difficult to recognise and treat.

I think my cat has been poisoned, what should I do?

If you suspect your cat may have had access to a poisonous substance, particularly if it is looking at all unwell, it is important that it be taken to a veterinary surgeon as fast as possible. If the cat is fractious it is usually best to wrap it in a towel and put it in a box to prevent it from hurting itself or you. This also prevents the cat from ingesting further coat contamination. It is NOT advisable to try to make the cat sick, for example by giving salt, washing soda or mustard, since none of these compounds work effectively in cats. It is best to call the veterinary practice to warn them that you are coming and give them time to prepare any treatments your cat may need.

My cat has got something 'chemical' on its coat, what should I do?

Only when the contamination is mild and confined to the coat, can the cat may be treated at home. The aim of treatment is to prevent further contamination.

The cat's collar should be removed as it may also have been contaminated, and some flea collars contain chemicals which may be harmful to sick cats. To remove chemicals from the coat it is best to clip off contaminated hair and then wash the cat in warm soapy water. It is important to remove as much of the contamination as possible, prior to washing, since the process of washing can increase the absorption of some chemicals. The cat must then be fully dried to prevent it from chilling. Oily material can be removed by rubbing it with clean, warm cooking oil, then wiping it off thoroughly, (i.e. remove oil with oil).

If you feel the cat may have ingested ANY toxin it should be taken to the vet. Even if the contamination is confined to the coat, it is important that the cat should be encouraged to drink plenty of water or milk since this will help to wash out any absorbed toxins.

After any exposure to possible poisons it is advisable to keep the cat inside for 24 hours observation. Keep it in a warm, quiet room.

What sort of things can cats be poisoned by?

Many everyday items are potentially hazardous and if you are aware of these you can help to prevent an accident. The majority of reported cases involve household chemicals, insecticides (chemicals that kill insects) and rodenticides (chemicals that kill rodents). However, in the majority of cases the nature of the offending compound is unknown, so it is usually necessary to take a general approach to treatment. Even in cases where the toxin can be identified, few specific antidotes are available.

Can be found in the garage (antifreeze, fuels), under the kitchen sink (acids, alkalis, bleach, disinfectants) or in the actual fabric of the house (wood preservatives). Intoxication can result from human medications (aspirin, paracetamol, antidepressants), certain foods (liver, onion, many baby foods, cocoa, too much raw fish), food contaminants (bacteria, fungi) or food additives (propylene glycol). Never give human medications to cats without checking with your veterinary surgeon.

(i.e. those that are produced within the body) include urea in kidney failure and ammonia with congenital porto-systemic shunts (abnormal blood vessels within the liver). While these are not classically considered as poisons, they can cause similar clinical signs.